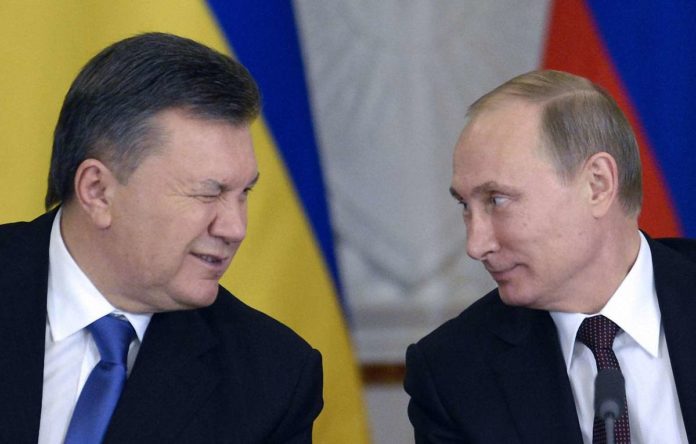 On December 13 at 11:00, Yanukovych’s lawyers at the Court of Cassation (13/1, Riznitskaya Street) will try to challenge the confiscation of $ 1.5 billion in the budget of Ukraine.

And I must say that the state system has come to the end if Yanukovych’s clique managed to pass the appeal to the “own” judge, which was filed by a lawyer of the Yanukovych regime Andriy Portnov.

So get acquainted – Judge Natalia Marchuk.

In the time of Yanukovych, Natalia Marchuk was one of the first to be employed in the main refuge of Portnov’s judicial reform – the newly formed High Specialized Court for the Examination of Criminal and Civil Affairs. How important was this refuge to Portnov shows the fact that he was able “to immensity” confiscate the main building of the National Defense University of Ukraine for the Court.

Natalia Marchuk was privileged judge of this court, who did not need to engage in ill-judged work. For three years, she has cased only one cassation and thus the decision of it was secret (and now she is outraged that the verdict for “special confiscation” has a stamp “secretly”).

The work (and for additional payment) was in her other way – she split up abroad, spoke at various seminars, conferences, trainings and talked about the advantages of the court reform of Portnov.

And now, the spokesman for judicial reform of Portnov, got into the Supreme Court and will decide whether the corruption assets of Yanukovych were confiscated correctly in the State Budget or not.

The General Prosecutor’s Office in this case should immediately insist on the removal of such judge. Especially since her “parent” – Portnov had been authorized to carry out the legal protection of her assets at the meeting of the Yanukovych’s Family in Moscow, so believe me he is carefully choosing a judge for cassation and appoint the best and the most loyal of his personnel.

And now I propose to look at the 13th year at the conference hall of one hotel in Sosnovy Bor, near Kiev, because that staffer clearly demonstrates why Ukraine so hardly returned to the budget $ 1.5 billion of corruption assets of Yanukovych, and when it turned it hasn’t been final yet – the criminals regrouped and they are preparing to re-assemble the budget again.

I would call this picture: “How the steel of Portnov’s Mafia was suppressed against special confiscation.” https://rm.coe.int/CoERMPublicCommonSearchServices/DisplayDCTMContent?documentId=0900001680097d32

So, on March 28, 2013, at the Jintao Breeze hotel complex, the participants in the same presidium did not accidentally unite, but accidentally lit up together with Andriy Portnov, Vitaliy Kasko, Mary Butler, and Natalia Marchuk, the main contributors to the shameful struggle against Yanukovich’s seizure of funds to the Ukrainian budget. To put it more precisely, the first three have already played their part, in turn, an ace from the Portnov’s sleeve – Judge Natalia Marchuk. 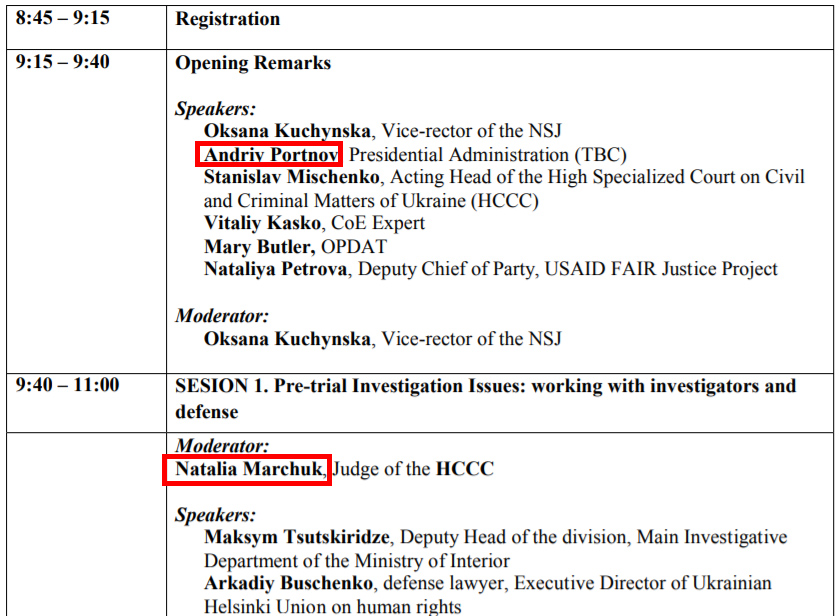 Remember the roles of the previous three. I have already spoken about Portnov, namely the fact that the Family has imposed on him the burden of asset protection. Moreover, the strategy of Portnov’s protection has never been on the forehead, and in order to maximally disorient Ukrainian society, so that it unwittingly contributed to the return of funds to criminals. Indeed, right after the appearance of the law on the special confiscation of Yanukovych’s assets, the “Ukrainian Truth” was published very close to Portnov Volodymyr Pylypenko, who was cleverly named with the consent of the venerable publication is not Portnov’s man, a representative of the Venice Commission, through crocodile tears argued that the law in the interest of Yanukovych will allow them to legalize revenues through the solution of European Court of Human Rights. 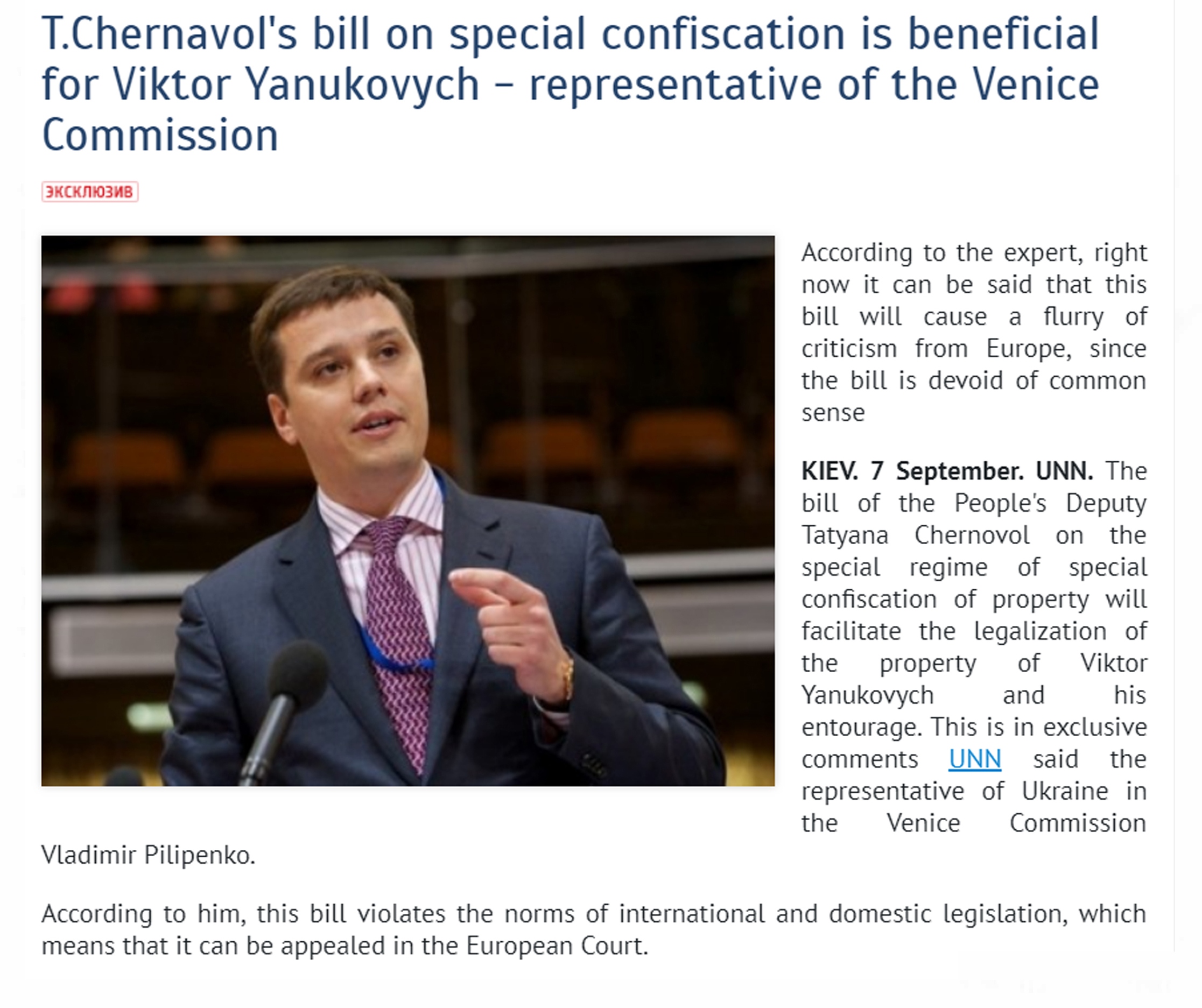 Next, Vitalyi Kasko, the next visitor of the Gintamo Breeze seminar, joined to the anti-confiscation campaign with the same arguments. 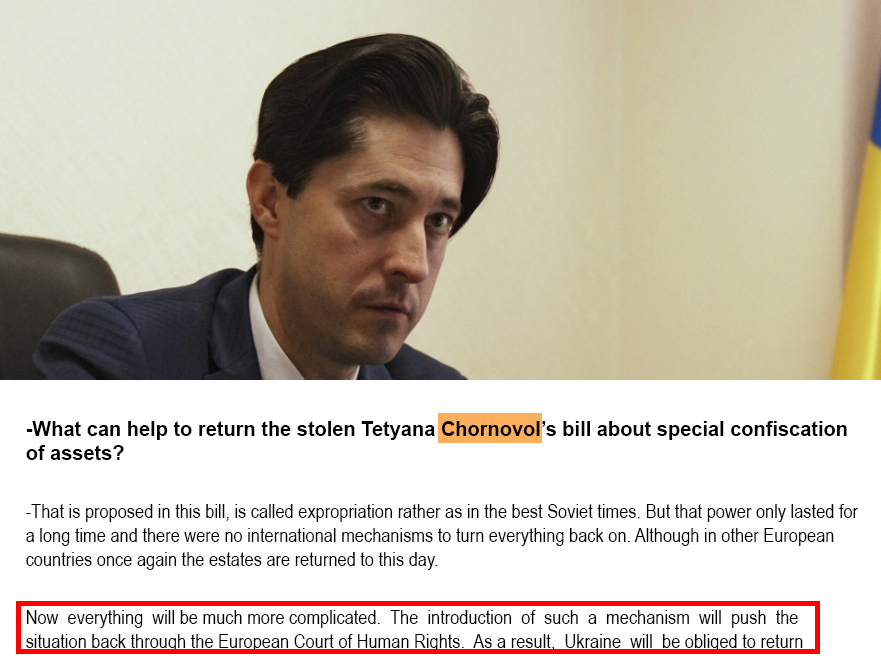 He well disoriented the society and journalists, in essence, proved that confiscating funds in the budget is even worse than stealing them. It seems like, how can you perceive this? But do not forget that in the 15-16 years Kasko was spoiled as the main anti-corruptor of the country.

He was named, as an expert of the Council of Europe, on the collection of the Tartan Mafia at Jintamo Breeze. This is not entirely true. In the time of Yanukovych, he worked in the law firm “Arzinger”, which served the interests of Kurchenko and the Family, and money from those corrupt schemes was returned to the State budget due to “special confiscation”.

After Kasko, Portnov, who was an asset manager, involved a heavy artillery campaign against confiscation. Another participant of Portno’s seminar in the Gypsy Breeze was a representative of the US Embassy, Mary Butler, who actually served as the main organizer of foreign grants in Ukraine for a long time, and also during Yanukovych’s time, reformed the court system with Portnov.

To stop the confiscation of Yanukovych’s assets in the budget, she pulled up a piece of paper from the Department of Justice in the United States, which criticized the initiative of Ukraine. 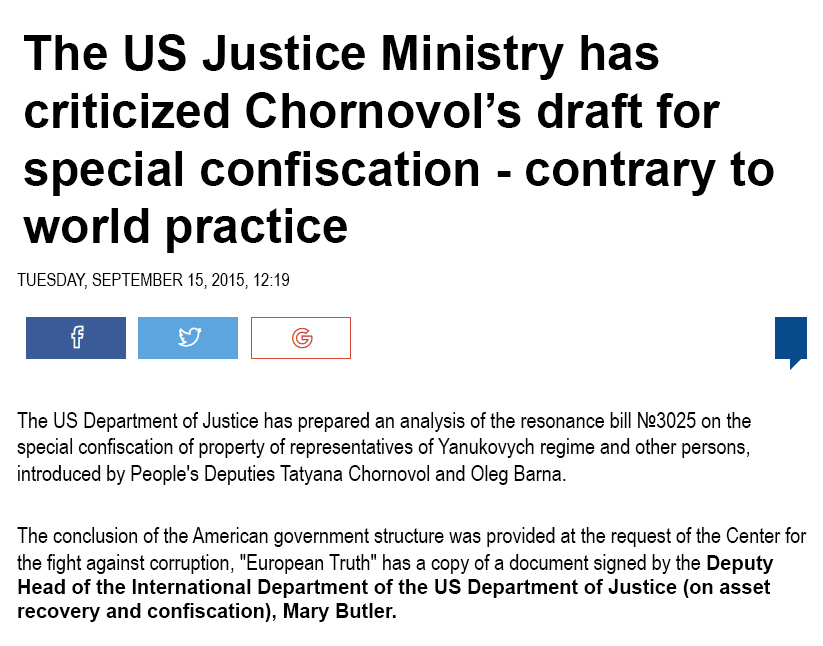 And despite the fact that such a kind of confiscation as “in rem”, that is, out of criminal proceedings without a court verdict, annually brings billions of criminal proceeds to the US budget, Mary Butler on behalf of their states cynically banned Ukraine from returning through such a mechanism the corruption funds of Yanukovych. Moreover, she criticized not only a specific bill, but personally forbade any work on legislation in this direction.

Of course, all “grantors” “anti-corruptionists” for the sake of the position of their “mother” were ready to lay down, in the literal sense of the word, only to prevent the return of corruption funds to the budget.

However, despite all this opposition to Portnov’s Mafia, thanks to the work of the General Prosecutor Yuriy Lutsenko, Ukraine has already committed $ 1.5 billion confiscation of Yanukovych.

But even after that Mafia did not surrender. And now it is expected to enter the stage of this one player from the Portnov’s sleeve – the court of Natalia Marchuk, who so ignorantly lit in the “Jintamo Breeze” …

Most cynically in this story, that what the “Euro-optimists”, the Kaskos, the shabunins in history with the “special confiscation” of Yanukovych’s assets, namely the litigation of special confiscation, are doing the most with their own hands, forces, personnel, mafia bonds.

Judging from an interview of another “grantor” Vitaliy Shabunin mentioned in “Today” judge Natalia Marchuk is his favorite.

And the consideration of the cassation complaint, regarding the confiscation of Yanukovych’s funds in the budget, fell to her not by chance. Portnov arranged that this complaint fell to her, and the judge also made by herself all efforts to this end. And I think something, not in order not to satisfy it, but on the contrary, to help Yanukovych recover his corruption money.

Moreover, judge Marchuk’s cassation trial is only one of the links in the system of repayment of funds to Yanukovych.

A year ago, in order to find at least the slightest reason for the court to challenge the confiscation, lawyers of Yanukovych’s offshore companies and Portnov’s mafia agreed with the head of NABU Artem Sytnyk to break three criminal cases in NABU, concerning illegality of confiscation of funds in the budget. This is probably the first time in the world history of the existence of anti-corruption bodies, such a body did not confiscate corruption funds in the State Budget, but rather return them to the criminal owners.

But Sytnyk, at the same time, cynically distributes his hands, saying that I am not to blame, because all three cases obliged me to bring a lawsuit.

Only this is a “fake”, because all decisions on the initiation of a case on the illegality of the confiscation were taken by one “hand” judge NABUs – Bobrovnykov. Perhaps he would have adopted the fourth and fifth decree … but the trouble of NABU did not calculate the pressure on this judge and brought him to death. Judge died at 37 years of life from a heart attack …

But Mavr (Moor) had made his work, and all that the NABU investigation scretches in those three cases, it handed over to lawyers of Yanukovych’s offshores, as well as a biased judge, to ease their path to appeal of the confiscation.

Incidentally, in an interview with the newspaper “Segodnya”, a “grantor”, a fierce opponent of Yanukovych’s seizure of assets in the budget, Vitaliy Shabunin admitted that the same detective of NABU was taught by the same judge Natalia Marchuk.

That is, there are many reasons to believe that the judge, lawyers of Yanukovych’s offshore and investigators of NABU have agreed with each other against the state interests of Ukraine.

So, I think the General Prosecutor’s Office should immediately begin the process of appointment of a biased judge, as well as all the participants in a criminal plot – the return of corrupt assets to Yanukovych has already been sufficiently lit, so that Security Service of Ukraine took them all to a pencil and merged into one criminal proceeding (there will be many articles, but you can start from a criminal organization and espionage).

Portnov, in the name of Ukraine, will decide whether the Yanukovych’s assets were legally...

Portnov, in the name of Ukraine, will decide whether the Yanukovych’s...